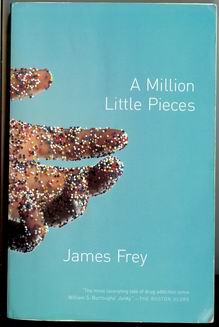 I’m writing in English because this is a bookcrossing book sent to me from abroad and I want my fellow bookcrossers to read it too.
So here it is. I started reading this book yesterday morning and this being the week my family is away and I’m home alone I finished it very soon, that is the next day. I wasn’t sure what to expect and until the moment I started reading it I wasn’t sure this book would relate to me in anyway. I mean Let’s face it I am a Greek woman, I have never gone through any major hardships in my life and I have no addiction to alcohol or substance or even coffee and cigarettes whatsoever. (OK, I may be slightly addicted to good food, but that doesn’t count does it?)

Another thing that worried me was the Controversy about the book. Maybe you have heard that it was advertised as a memoir, as a real story, everybody was thrilled with it, even Oprah presented it and raved about it and later some journalists revealed it was in great degree fabricated. Scandal followed, newspapers wrote “Oprah was conned” it made National News in the US and many people who had read it felt deceived and cheated. I don’t know how I would have felt if I had read it before the revelations but I think it wouldn’t matter all that much.

The book is astonishing. I was reading it as fast as I could. In the first chapters I had a constant frown on my forehead, as if I couldn’t believe all the pain and all the suffering a person can inflict upon themselves. The fact that it is narrated in first person, and written in Present Tense, in short curt sentences make it sound even more urgent. The narrator finds himself in a terrible state. He has lost his front four teeth, he has a hole in his cheek, he has intoxicated himself so badly he has blacked out. His parents help him check in a rehabilitation centre and he tells us his story of detoxification and rebirth.

I’ve been reading about the pints that upset people most, the incident with the dentist a couple of confrontations with other patients and his relationship with Lilly and I don’t understand what upset people so much. For me the most powerful parts of the book are his meetings with his parents. I couldn’t stop crying there and I couldn’t stop admiring the narrator for being so eloquent.

Me coming for a very different vulture, a culture where talking through difficulties is not very common yet I couldn’t help wondering at how these people expressed their feeling in so many words. Especially James himself knew exactly how he felt and what he wanted to say even at his most embarrassing moments with his parents. After this who cares if he embellished some parts or if he presented himself a bit tougher or more reckless than what he was. He seems to me like a man who knew he was responsible for his trouble and he faced them. “I refuse to become a victim” he says at some point and he means he isn’t going to blame his situation on to his parents or his genetic disposition in his early childhood.

I kept thinking while reading this book other books I have read about substance addiction. All the doctors and councilors in this book seem to agree that addiction is a disease. They also seem to agree that these rehabilitation centres where patients are forbidden to use any drugs are hardly the solution with a meagre success rate of 15%. However there is no mention of any other possible approach to the problem. Of course the book refers to the USA. Although I would like to believe that quitting drugs and trying to deal with your addiction with the help of therapy and the support of you family and friends it doesn’t seem to be working. What if we treated addicts as real patients and started giving them what they want at controlled doses? I don’t know, I’m just wondering. The writer would of course disagree with me, since he doesn’t even accept that addiction is a disease. He believes it is a choice.

These are my thoughts about the book. Overall I found it very powerful, very emotional and very well written. At some point I was also wondering what makes some people take drugs and some others not. James Frey gave me that answer too when he wrote: (he refers to the rehabilitation centre) “In here laughing is the only drug. Laughing or love”. I think I had loads of both.