Back when I was a teacher working in a small rural school in Greece, 33 klm away from where I lived, I used to drive there with colleagues. We would alternate our cars and save on gas. In 2008, I was car-pooling with a teacher of Physical Education. Let’s call him T. He was tall and big as a mountain and had the face of a farmer. He didn’t read books or go to theatre or surf the internet but he had such a strong inner philosophy that I still remember those car rides. Back then, I was participating in something called Postcrossing where you send postcards to strangers all over the world, just for the pleasure of receiving something with an exotic stamp and a few kind words in return. One day I talked about it to T and he turned to me and said: People need to feel loved, that’s why they come up with ideas like this.

Fast forward to 2016, different country, different city. Let’s meet Serve the City: some say it is an association, some others that it is a broker of associations, a few of us suspect it’s a movement. In any case it consists of people who bring together associations, based in Brussels (and other places in the world) in order to facilitate volunteer services. Among their activities, every year they organize what they call The Big Volunteer Week where students, companies, private persons, can join forces and offer their time to people in need.

That’s how I came to know them: the organization I work in, participated in this project for the first time and we were encouraged to get involved too. The idea behind it is that helping in projects in our city is good for the city but also for us – we become more engaged, more connected, in the long run healthier and happier.

Where I come from, volunteering, was not very widespread until about 10 years ago. It was with the Olympic Games of 2004, in Athens, that many people came to know what volunteering can do and what great impact it can have. Even then, the thousands of people who volunteered in the organization of the Games, with magnificent results, were harshly criticized in the press because simply there is a very distorted idea of what a volunteer is. But I also think that it is organized structures of volunteering that get the bad press in Greece. Our culture is one where people are always involved in collective projects, we are deeply connected in our communities and give our time and resources. I always remember the women of my family, grandmothers, mother, mother-in-law cleaning the public space outside their homes because this is what their inner sense of duty made them do. We just don’t call it volunteering. We call it Filotimo.

In autumn 2015 when the great refugee crisis broke out, I was amazed by how mobilized the people of Brussels were: In Maximilian Park there were hundreds of volunteers every day. There was very little state aid but tons of private initiatives, thousands of donations, no lack of food or clothes. It was touching to see and moving to participate. Spending just a few hours there served to put you well into planet earth and realize how small we are and how fragile our lives can be. 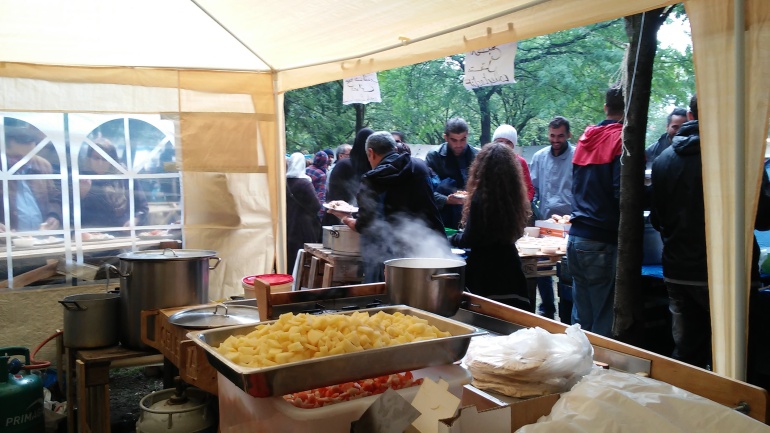 And I know for a fact that the same thing was happening back home. Even more because here in Brussels there were a few hundred people arriving every week (and now even less) but back in Greece the numbers where in the thousands every day. What can I say for all the people in islands who risked their lives, their health and their sanity to be there and help? People who were in crisis themselves because the country hasn’t been doing well for years now. Just one word: RESPECT.

To come back to Serve the City and last week’s activities: I joined a group called Food 4 Friends and we made a few hundred sandwiches and went to deliver them along with tea and coffee and fruit, to homeless people in one of the train stations. The people we served were people of all ages, coming from various countries. For some the cheese sandwiches and the apples we offered would be the only meal of the day. How could you blame them for passing from the line two or three times?

Our leader told us: “don’t be surprised if these people are well dressed. There are plenty of donations of clothes” ( which actually shows that we all buy many more clothes than we need and then we give them away to make room for new ones).  What surprised me was how shy and timid people were. They were really reserved and were taking what we were giving with a sense of wonder. “Can I really take that?” But so were we, the volunteers. We didn’t know very well how to approach them, how not to seem arrogant or pretentious.

Call me an incorrigible optimist but I believe that people are essentially good. It has been proven again and again that when people are left to their own devices they consistently do good. If we see the overall picture, crime is the exception and not the rule in our society. I must have read it somewhere but don’t remember where, that it is for evolutionary reasons: living in a group where most members are behaving in an acceptable way we have more chances to survive. My friend Marianna says that this is selfish: if we volunteer because our ulterior motive is our own survival, isn’t that selfish? It may be, selfish genes and all. But still, lots of small actions have a big impact. You decide the other person is another human. It doesn’t matter where they come from or how they ended in the streets. One of the people we helped today was a cancer survivor, unemployed, recently divorced, with three children all under the spectre of autism. What can you say about this person? Who am I to judge her for making some wrong choices along the way or for being unlucky?

Nino, the guy leading the project I took part in had explained: “It takes time to create bonds. It’s not necessary to say much. Just being there is enough. If you want to create something deeper you will just have to show up regularly. That’s what it takes – showing up”.