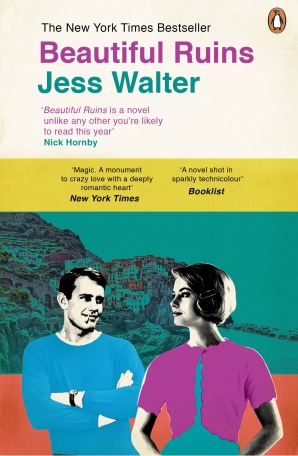 It is funny how some books come into our lives without us making a really conscious choice. I am particularly good at this while I suck at choosing carefully in bookshops. Especially with novels in French that I am currently trying to discover I make bad choice after bad choice. On the other hand the books that come my way at random they prove to be fascinating.

Beautiful Ruins is one of those books. I remember last year I had gone for lunch with a friend and on our way out of the building we discovered a book corner where people would leave books and magazines. There was a stack of TV magazines that I was wondering who would possibly be interested in past their date, and there was this book too. The author was unknown to me and the title as well. And if it wasn’t for the interesting cover I wouldn’t have taken it. But I did. And it stayed for months unread. I even took it in Greece in the summer but still didn’t read it and left it there. In a recent trip home, I thought, Hey, I should read this now.

And I did. And I got really hooked. There are many stories happening in the same book and it takes a while before we realize they are all connected somehow. And they are all in different times and at different locations and backgrounds. But Walter seems to know or have researched thoroughly about all of them and they all seem natural. Italian shores of the sixties, the filming of Cleopatra with Elisabeth Taylor, Italy during the war, Hollywood, Edinburg Fringe festival in the 90s, they all come lively.

I can’t tell exactly what I loved about this book. It held me from the first pages but up until the middle I wouldn’t say it’s great. After some point though, when all the stories began to converge and when the heroes become more reflective they seem to jump out of the page. You can feel their sadness and their failures become more tangible, their weaknesses more understandable.

To say a few things for the plot would reduce it considerably. And  I do not have the talent of pitching like the Hollywood producer described in the book. Suffice to say that there are a few love stories evolving, some that end well and others not so well. In the meantime people get married to people they don’t love, people lose their jobs, fight their addictions, fight against old age, fight against routine, fight against all odds to survive.

At the end of the book there is an essay of the writer that says that like most novels this is a novel about time: “I mean there’s something in the way time moves through and around a novel, and through us and around us when we are reading it, that it is singular to books, that is transcendent, that causes us to rise above the highway, to contemplate time’s passage and its meaning, and to feel its wistful power and wrenching distortions”.

Maybe this is what got me into this book in the first place: it found me at the right time of my life. The writer says that it took him more than a decade to finish it. In the meantime he wrote other books, he finished other projects (he also works in films) but the heroes of this story never seemed to leave him. Me too, before I finished this book, I read another one, half-finished a third and in the meantime I kept thinking about the story.

So why read it? It’s a good story, well, lots of good stories brought together spectacularly, magically even. It’s good in a quiet way, like some films of independent American cinema. It’s good without showing off. In the writer’s own words: “This could be the ending of the book, a way of acknowledging the power of certain moments in our lives. These are the ruins of our memories which loom in our minds like the Parthenon, even as they decayed and weather by time and regret”.