I went to Istanbul once and everybody was telling me I had to try the hamam. I didn’t. I didn’t have the time.  And I’ve lived for years in Rhodes where there are Turkish baths and I haven’t tried them either. But life is good, at some point it gives you what you need. Or is it the other way round? At some point you get what you need? Sais pas. In any case I had the chance to visit a hamam here in Brussels and it was like an awakening experience. 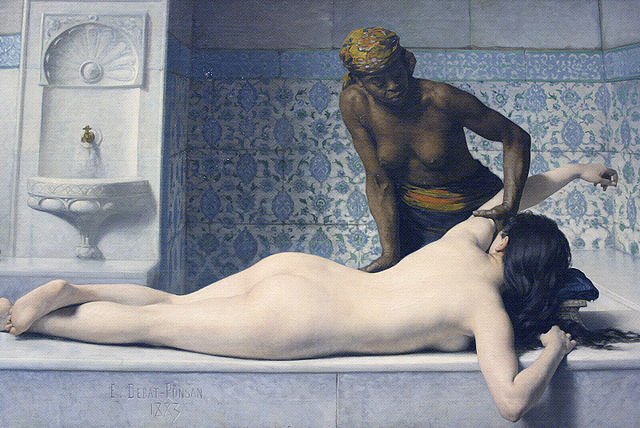 It is a hamam in a modest neighbourhood, even while entering I thought I had the wrong address, but no, there it was.  Welcoming anyone who needed it and not excluding anyone. I saw all kinds of women that day. Middle aged and young and old and girls with their mothers. Students and working women, mothers and single women, grandmothers and wives, daughters, sisters, all of them sisters to each other. There were black women with their tall slender bodies and their proud breasts standing high, like queens. There were women with white skin that the sun hasn’t seen for ages. Women with big butts that were strutting around confidently and were fighting for their turn in the “gommage” table. There was an old woman with long white hair, she reminded me of my grandma, she had just gone out of the hamam and a younger woman was combing her hair. She was wearing a light transparent dress, like a nightie and the girl was so tender with her. There was a tall woman with olive skin who was there with her baby son (probably the only male allowed in that temple of women). She washed him and herself and then when we had finished and we were getting dressed in the dressing room she was breastfeeding him. The boy was looking at me and I smiled. He held his arms and I took him….Oh, the sweet baby smell and the skin that touches your skin…

There was a woman who seemed a bit sad when we were waiting outside but when she started telling her story her eyes lit up. She was coming from Morocco and came here to get married. She spoke nice French but said that her husband didn’t allow her to speak it at home. He didn’t allow her to play the radio either, it was too loud. So one day, she said, “I left him. I was fed up with life getting away. He didn’t want this, he didn’t want that, he was putting on airs and didn’t respect me. I don’t want this life”. So you see? We think that courage is extra ordinary and rare but no, courage is this woman who left what she knew for something uncertain because she knew it wasn’t for her. Strength is this tender, soft woman with her curly hair and her black eyes who is wondering whether another man will ever love her and her children again but she still left because she couldn’t play the radio.

So there we were. Each one with our stories. All of us wanting to enjoy a little time of relaxation in the company of our sisters. All naked, nothing to separate us or define us, just our existence. Some of us luckier than others but you couldn’t really tell in there. There was a woman who told me that her first husband had been beating her. That she had been living like a queen with him with all the money of the world but what use was that when he beat her black and blue? Inside the hamam, her body shone with sweat and argan oil and fortunately I could see no sign of that previous violence. She was lucky too, she had managed to escape.

And then there was me. I was looking around with eyes big with wonder and pleasure. I was in awe really. All this nakedness and companionship, I really felt I was at the right place. Experiences like this change how you see life because they reframe even every day gestures and habits. Whoever wonders about their showers? It seems in our world the less time you take in your shower the better you are. I used to get very irritated with my brother when we were teenagers because he took endless time in the shower. But now I realize he is probably right. How many times in the day do we have to be alone with our naked bodies, with our naked thoughts? Why are we in such a hurry? What are we afraid of?  What can a naked body do that scares us so much? Is it the pleasure that we fear or the nakedness?

There have been numerous studies that indicate that it is during this relaxed time that we have our best ideas and aha moments. So why do we hurry them? And how do we see these other cultures where the rhythm is slightly slower?

Now, it’s two weeks after I went to the hamam. I am still thinking these questions. I haven’t found the time to go back there again, although the lady with the radio told me that once a week is the minimum. I am immobilized despite my will, by a sprained ankle. I cannot go out yet, I cannot run about, I am forced to take my time and reflect. And reflect I will. My friends are all eager, to do my shopping, to bring me food or drinks or watermelons and feta cheese. Or just to come around to pass some time together. But I will resist for a while and enjoy this precious solitude. And I promise to take my time in the shower…